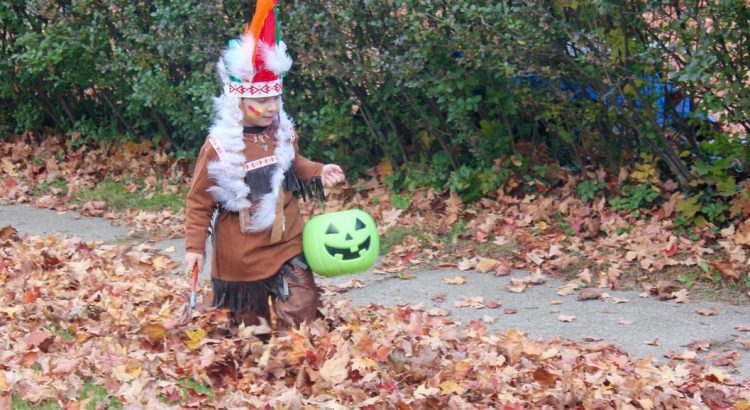 Just to make sure there is no misunderstanding from this post– I LOVE THE SUMMER, but we are now technically in Fall, which is my favorite time of the year. While Apple picking is probably high on most people’s agenda, the main topic of conversation centers on that all important question – What are we going to be for Halloween?

For the last couple of years I’ve set the goal of ‘making’ the costumes as opposed to ‘buying’ them. Last year I wrote an article about the need for time – time to incubate ideas, time to plan, time to gather the material, and time to experiment (which in Design Thinking is prototyping).

SEE ALSO: Introducing some of the principals Design Thinking to young children

I advocate for the making of costumes, because it provides an opportunity to involve the family in a design process that engages our creative thinking and problem solving skills. It’s also makes it easier to identify your little ones on a crowded street, as they’ll probably be distinguishable from the many Disney Store costumes that will no doubt be in full display come Halloween.

Choosing what you’re going to be for Halloween, is what designers might refer to as an ill-defined or wicked problem. It lacks definition, is ambiguous, and comes with multiple directions to pursue. It’s likely each family member will have their own perspective for the best course of action, and so there is a need to tame this wicked problem before you move forward in generating ideas and designing your final product. This journey makes up part of a creative problem-solving process, which is so cherished by designers and practitioners within creative industries. Unfortunately, within education we are too often presented with defined problems that are often accompanied with a set of directions that easily assist us in easily navigating to a predetermined outcome. This method doesn’t engage children in a meaningful process of problem-solving, and as they progress through the grades they can become so accustomed to being told the ‘right’ and ‘wrong’ way to do something, that they become uncomfortable when presented with an ill-defined problem.

Now, bringing this back to applying the principals of Design Thinking during Halloween – there’s always the option of taking a trip down to the department store, and letting your children choose one of the many costumes on display. However, if you have the time (as I know this is often the significant factor), I would encourage you to see Halloween as an opportunity to engage the family in a creative problem-solving process.

STAGE ONE: Clarifying the Problem: What are we going to be?

The first stage of the process begins with clarifying the problem. Ultimately, this is where you have to work with your little ones to identify what costumes you need to make (and potentially set a budget)? During this stage you will no doubt welcome the whacky ideas that naturally manifest, and eventually settle for something in the middle (unless of course, your field of expertise is costume design). So that everyone is feeling heard, you might want to start by simply writing all the suggestions down on a piece of paper, and exploring what other families have chosen using a simple Google Images search (that’s how we eventually came up with the plane idea below).

A few years ago Lucas was intent on being a fire breathing, robot skeleton dinosaur, I welcomed the idea, but continued to challenge him to generate other ideas so that we would have options. He eventually opted for a Peter Pan theme, which was more inclusive for the family (PHEW!)

STAGE TWO: Ideating: How to I make the costume?

This is the stage where you need to go out an explore ideas on how to make your costume, as well as determine who is going to be who. Pinterest is a place where all the creative parents hang out, so I highly encourage you to explore this as part of your research. You might even stumble across some design suggestions. I encourage you to identify a few different options, as you’ll likely benefit from taking a little bit from here, and a little bit from there, in order to make the perfect costume. You might also consider having the little ones sketch their own designs.

Prototyping allows ideas to be experienced by the user, it gets them out of the head and in a place where they can be touched, felt, and observed. For Halloween, this is where you get the little ones to try on initial design. Ask them how it feels? Does it need any adjustments? We had to do this a lot with the plane in 2013. Making sure it fitted Lucas correctly, and more importantly could be taken on and off quickly in the event that he needed to use the restrooms.

You can also involve the little ones by challenging them to make observations, and offer suggestions for improvements. Each improvement is called an iteration, and there might even be a need to scrap the idea and start all over again – and while time might be against you during this stage of the process – don’t give up!

Time is always a factor, so perhaps you alternate years of making and buying costumes. Whatever you do, just be sure to start thinking early, involve your little ones in the process, and most of all don’t forget to take those pictures!