FREE EBOOK FOR PARENTS AND EDUCATORS 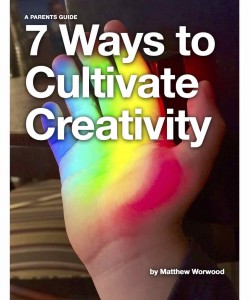 What to know how to cultivate creative thinking skills at home? 7 Ways to Cultivate Creativity is a short ebook for parents who want to learn more about this topic and how they might better nurture Creativity at home. While not getting too deep on the academic theory of Creativity, I’ve still made reference to some of the big ideas on the subject without overly complicating the conversation. My hope is that parents can use the information in this ebook to create the type of environment and opportunities where Creativity can flourish.

One of the first things we can do is recognize Creativity, as a way of thinking that expands beyond the arts, and not in the possession of a limited few. In 1958 Joy Paul Guildford, an American Psychologist who is often credited for founding the study of Creativity, considered Creativity to be:

‘being something that lies behind behavior; behavior that is imaginative and inventive. Such behavior can be found in clearest form in the lives of certain people – scientists who make new discoveries and construct new theories; artists, designers, writers, and composers; and architects, designers, and builders.’

As parents we want the very best education for our children. This is often interpreted as being good at the ‘academics’, which is primarily measured on the outcomes of a test. Reading, writing, and mathematics are all extremely important, but research shows that having good grades and being able to memorize facts does not translate into a successful and financially rewarding career. Instead it’s been found that students who demonstrate above average talent (though not necessarily the highest), require motivation and creativity in order to increase the chances of successful outcomes later in life.