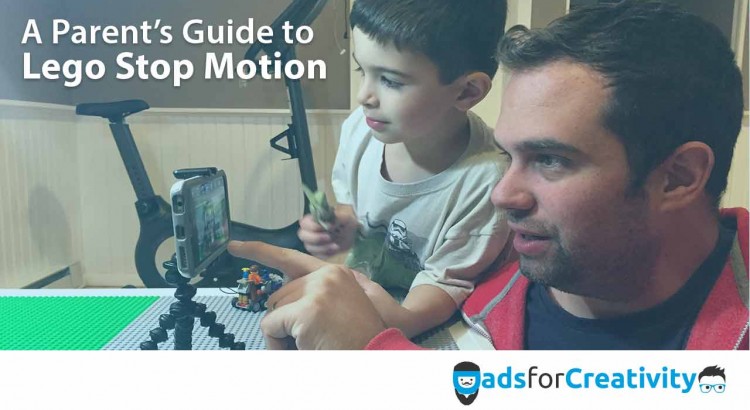 When it comes to Kid Moviemaking Ideas, Lego Stop Motion is super, super high on the list. Not only does it allow our little ones to generate fun stories that can be easily captured, but it also extends the creative thinking to constructing worlds, and engaging problem-solving skills in not only the child, but parent as well.

After fellow parent, David DiBartolo completed his Fine Arts degree he landed in the world of video, and now applies these skills at home with his son Drew. Below he shares some tips and tricks for parents looking to get into Lego moviemaking. Also, don’t forget to comment for free access to the film Creativity in Education: Exploring the Imbalance.

How did you get into making Lego videos with your little one?

When my son Drew was four he got his first Lego set, a Star Wars spaceship of some kind. I noticed he had some really imaginative play with just the ship and the three characters that came along. I thought it would be a great idea to film him and capture some of the great stories he was telling. As his/our passion for Lego grew we began watching some really great stop-motion Lego movies on YouTube, and it was Drew who suggested we try to make our own.

Like any creative endeavor, it began very basic. I wanted to find a way to make it easy for a four/five year old to make his own movies as well as keep his attention so he doesn’t get board of the monotony of the stop-motion process.

We had no lights or tripod. I chose the brightest room in our house and suggested we shoot on my iPhone as appose to the DSLR cameras that many of the YouTube videos are shot with. As for a stop-motion app, we landed on the “LEGO Movie” app. It has some canned effects, stock music, and a pretty simple UI for a four/five year old to grasp.

Can you tell us a little about the Lego Stop Motion App? How easy is it to use? Do you need to know about Stop Motion and Movie Making?

The “LEGO Movie” app is pretty simple. It gives you the option to chose your focal point, turn on the flash on your phone, and use it as a light. An “onion layer” option so you can see the previous shot for a fluid sequence. As well as some pre-canned effects and music to help make the post-production of the video a little easier.

What advice can you offer parents looking to make Lego videos with their kids?

Start simple and plan out the story before going into the shoot. Drew and I have a “pre-production” meeting where I try to limit his grand ideas into a simple story. He has a great imagination and sometimes imagines stories that would rival most summer blockbuster films.

The best thing I learned is to give him rules to work within, otherwise he’d either get frustrated, or bored, and not want to finish – or we’d end up working all night!

I have him choose a hero, a villain and some supporting cast. I also have him choose one location and work the story around that location. I ask him what problem his hero has to solve. If the solution begins to get a bit too violent I ask him what his hero could do to avoid the violence. Asking questions about his story really helps hone in on the core of the story he is trying to tell. I let him create the story I just guide him in a positive direction.

Sometimes he gets really excited about his idea and I suggest we draw storyboards so when we go into filming I can refer to this so he stays on task.

As for useful equipment, using a tripod and/or a studio light help. The main reason is to get a level steady shot and try to even out the light, so the shadows don’t get too heavy.

Check out one of Drew and David’s films below.