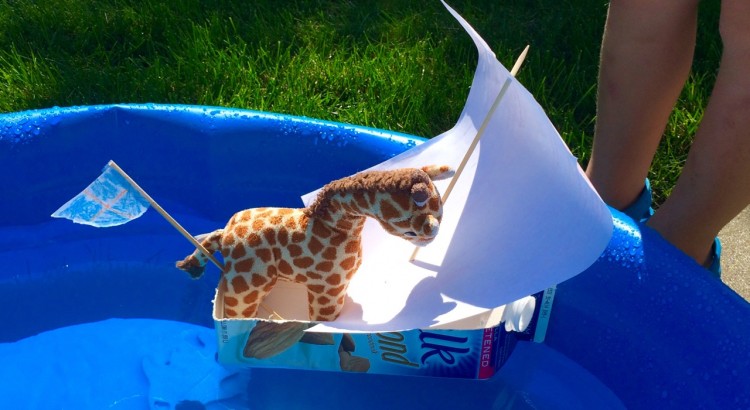 “Few people think about it or are aware of it. But there is nothing made by human beings that does not involve a design decision somewhere.” —Bill Moggridge

This weekend’s sailboat activity was a disaster! Daddy’s boat sunk as spectacularly as Henry VIII’s Mary Rose, and now lies at the bottom of the deep blue swimming pool.

The Saturday hadn’t started off too badly. Following up on my article on introducing design based thinking to young children, we decided to make a sailboat. Now Lucas from the very start become fixated on making sure Brother Dadu (one of four toy giraffes) could fit safely into the boat, and this seemed to factor into nearly every design decision we made.

Daddy: Which one will be the best for a sailboat?

Lucas: This one (pointing to the large milk carton)

Daddy: Why this one?

As this activity was designed to introduce some of the concepts of prototyping, I encouraged Lucas to offer a little more of an explanation for his decision.

Daddy: Ok, but which one will be the best in the water? Remember our sailboat will be going into the water.

Lucas: I think this one because it’s the biggest.

This is an example of how a toy giraffe sabotaged my perfectly thought out sailboat/prototyping activity. It was all about making sure that Brother Dadu, could fit in his boat, but sometimes it’s important that we go where our little ones take us, so I let him choose milk carton, and I selected a plastic bottle and said this was going to be Daddy’s boat. Interestingly, his observation this time was a little more on point.

Lucas: Yeah, but I think this one is not good because it might fall over.

After we cut out what will become the hull for each of the two boats, we turned out attention to material for the sail. We had a little more success at this part of the activity, as Lucas was assured Brother Dadu could fit into his milk carton, he was able to think a little more about making the sailboat actually work.

Daddy: What’s the best material for a sail?

Lucas: This one will blow the best because it’s made of paper and paper can blow away in the wind.

We used furniture pads to hold the masts in place, and at this point Lucas soon began to concern himself again with space for Brother Dadu. so we had to relocate the mast, which meant detaching the furniture pads, but Lucas was now starting to think like a designer, and in some ways was even thinking of the end user – his toy giraffe!

We tested our boats in a little paddling pool, but had to wait until the following morning to put them into the ocean (the swimming pool). , and during the night one of the sails had became a little loose.

Lucas: Daddy, the Lollypop sail is a little bit shaky.

But this wasn’t a major concern because it was in Daddy’s boat.

At the pool Lucas wasn’t interested in actually testing the sails, and only cared about placing Brother Dadu in his boat, which he did successfully, but eventually he fell into the water. At this point the rest of the activity was centered on making a really tight seat belt, but he didn’t fall in after this, and his sailboat was a success. Mine on the other hand, sunk within a few seconds of setting off from port.