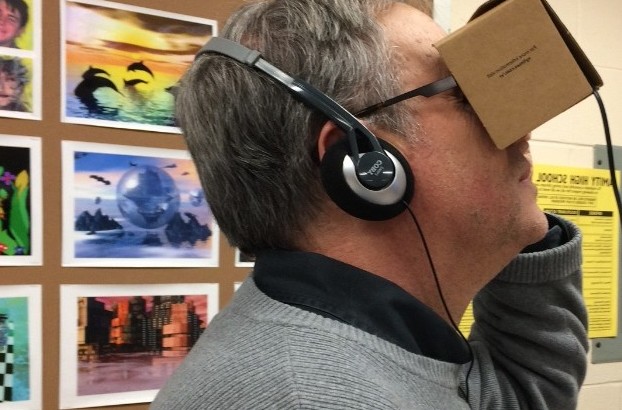 You played the game with your kids. Cup your hands like a camera lens – look around 360 degrees – up and down – side to side – until you spot something: “I spy with my little eye….”

But the whole game is about to change – the very definition of “what you see” is about to take you down a rabbit hole into a new world of experiences!

Last week my eleven year-old daughter and I got a crash course in Virtual Reality thanks to an innovative app from the NY Times (NYTVR) and a cardboard Google VR viewer (above):

Times editor Jack Silverstein termed The Displaced, the paper’s first story in the field of virtual reality journalism, “a new frontier in storytelling.” The idea behind what’s being called ‘immersive journalism,’ according to Lorne Manly, “is that the visceral experience of VR makes the viewer a new kind of witness.”

After Natalie and I downloaded the VR app for my iPhone, we were given the option to watch The Displaced, a virtual reality story/documentary that is shot in South Sudan, Ukraine and a Syrian refugee settlement camp, by looking right at the phone screen or, much much better – by placing the phone in the Google viewer. There is no comparison:

“The magic of emerging virtual reality technology,” the Times explains, “is that it takes viewers close, very close, to the children — and the world — that are the subjects of the film. So close that at points in the 10-minute film, it seems that each of three children is standing right in front of you, looking you in the eyes.”

And it is magic. Natalie and I each took turns experiencing the sensation of VR – as we seemingly travel with a young Sudanese boy as he maneuvers a make-shift skiff through a swamp – look from side to side and you see what he sees as he stands in the skiff – look upward – you lose sight of him, but see the African sky – now glance down & there is the bow of the skiff gliding through the muddy water!

“Virtual reality is famously indescribable,” Peter Rubin reports in Wired, “I can write all day about what it’s like to descend into the sea in a shark cage, or hang out with a lonely hedgehog, or walk through the streets of Liberia… until you do it yourself, though, it’s all just words.”

I will save for another post how VR is already being used:

College and NFL teams have begun to use Virtual Reality to evaluate potential players: imagine putting a VR helmet on a college QB and have him take snaps against a virtual opponent!

Robert Hof likens VR headsets to “juiced-up View-Master toy stereoscopes …allowing viewers to navigate three-dimensional videos and animations. The 360-degree images and sound shift with the user’s head movements, tricking the brain into reacting as if it were all real.”

And this is only the beginning.

For the fun of it Natalie and I traded experiences of what we’d like to experience in VR. Without hesitating, she wanted to zip line through the rain forests in Costa Rica. I was torn between driving the Patriots downfield with the vision of Tom Brady, and experiencing a visit to a Tibetan monastery. Maybe one then the other.

In The Future of Virtual Reality Janson Ganz asks, “What would you do if you could do anything? Would you be a rockstar, playing a sold out arena? Or be a surfer, riding the gnarliest 100-foot swells this side of Hawaii? No seriously, stop for a second and picture it. Imagine yourself there. For most people, this is a fun hypothetical question. But not too long from now, it’s going to become reality… because nothing is ever going to be the same.” 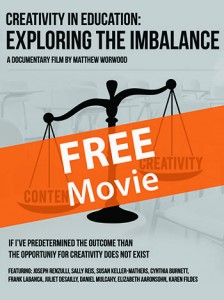 One thought on “Playdate with New Tech: I Spy With My Little Eye…Virtual Reality”